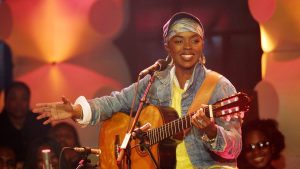 Today, Allie Manders talks about Lauryn Hill’s 2002 effort, “Mystery of Iniquity.” Lauryn Hill is an innovative artist who began as a member of the Hip-Hop, R&B, Reggae, and Jazz group,The Fugees. Hill brought this mixture of genres with the addition of a few others into her debut solo album, The Miseducation of Lauryn Hill. Miseducation went on to win five
Grammy’s, including Album of the Year in 1999. Three years after this major success came Hill’s second solo album, a live album recorded for MTV Unplugged. This album was released to a small audience and what some may say obscene criticism. Hill has not released another album since.

Allie Manders: Lauryn Hill was at the height of fame at the end of the millennium. It seemed as if she was going to have an incredibly strong career going forward after the release of one of the most popular albums of the decade, The Miseducation of Lauryn Hill. But by July of 2001, when she recorded her second album for MTV Unplugged, her reputation had already dropped quickly from being one of the most popular artists, to being called a crazy, emotional, diva. When the album was released in 2002, reviews began pouring out with critics saying it was messy and emotional, which aligned perfectly with her new reputation. Over the last year, Lauryn Hill’s music was sampled by two of the most popular and successful artists of today, Cardi B and Drake. This leads to the question, was it really Lauryn Hill who was miseducated, or her audience?

Today the focus will be on one particular song of Hill’s that seems to be missing from every online list of protest songs, the Mystery of Iniquity, which was featured on Lauryn Hill MTV Unplugged No. 2.0. You might recognize it by the chorus.

As you heard, this song is sampled as the hook in Kanye West’s “All Falls Down” off his critically acclaimed album Graduation. West originally requested to use Hill’s version of the chorus, but  when she was unresponsive to him, he decided to have Syleena Johnson fill in and re-record the chorus. Oddly enough, while it might arguably be catchiest part of “Mystery of Iniquity,” the chorus contains one of the the least profound lyrics of the entire song.

Lauryn Hill: ”Ya’ll can’t handle the truth in a courtroom of lies

Allie Manders: This is just the first few lines of the song, and you are immediately thrown into her argument. The lyrics are hard hitting, and while it is not entirely organized, Ms. Hill makes her point. With most of the lyrics, there are no two ways about what they mean. She is severely disappointed by the United States legal system. At this point in her life, she only had small legal troubles, but it is clear that she is not just speaking about her own experiences. Hill is using this song to express the injustices by the U.S legal system towards  people of color.

In my opinion, Lauryn Hill MTV Unplugged No. 2.0 is a concept album. All songs intertwining together with similar themes. Most of the subject matter is a critique of life at the time, which was only a short while ago, whether it be discussing the legal system or humanity in general. She uses the name Adam to represent all of Humanity, for the good the bad and the ugly.

Lauryn Hill: When I refer to Adam, I’m really speaking about all of Humanity. Without exception of anybody. And I know that a lot of content in the songs is very heavy. See, fantasy is what people want but reality is what they need. And I’m just retired from the fantasy part.

Allie Manders: Another critique that was apparent about the album was that Hill makes many Bible references. When reading about Ms. Hill, several sources stated that she spent most of her time studying religion and the Bible at the time she recorded the album. One review stated “it’s just Hill and her acoustic guitar, warbling meandering songs about God and the emptiness of fame, interspersed with lengthy Oprah-style monologues” This was said by the  male author, Alex Needham.

Unsurprisingly, most of the initial negative reviews of the album were written by men. Another one, written by a woman at the time, claims “‘Unplugged,’ the re-education of Lauryn Hill, can be described by a hundred adjectives. It’s sincere and overbearing. It’s raw, inspired, emotional and, at times, agonizing. It’s brave and, possibly, foolhardy. It’s self-absorbed and self-effacing, wise and naive.”(Orlando Weekly).

One of the only positive looking reviews I came  across titled “Why Lauryn Hill’s ‘MTV Unplugged No. 2.0’ Album Is Still A Gem” was on a page that would not open no matter how hard I tried. After continuing to dig,  there were only a few positives ones, all of them being modern, and most of them titled something along the lines of “Lauryn Hill Owes Us Nothing” and others encouraging people to listen to the album today, because it was grossly dismissed.

Here, Hill discusses her intentions with the Miseducation of Lauryn Hill, and describes how she believed her second album would be. This was recorded prior to the recording of Lauryn Hill MTV Unplugged 2.0

Lauryn Hill: That record was all about how I feel, you know? It’s going to be interesting to see what the next record becomes, because that will probably about what I think. As opposed to everything I feel, what I feel.

Allie Manders:  This album was extremely stripped down, but again, it is MTV Unplugged.

Several other artists did it similarly to this and did not face the same criticism.

Some of the negative reviews could have also come from Lauryn Hill’s reputation at the time. Lauryn Hill was not in any specific group of women rappers,  she was not in the overly sexualized Lil Kim and not in the never sexualized group, like Missy Elliot. The Hip-Hop scene put women artists in these two buckets, and Hill fit in neither.

Lauryn Hill: You know, it was about a young woman, in the music industry. And the pitfalls, the  snares, the traps. And they don’t stop, they keep coming, they don’t stop.

Allie Manders: This brings in the question of what are we  supposed to expect from artists? Are they supposed to cater to our tastes?

Lauryn Hill’s style changed drastically between her two albums. Miseducation of Lauryn Hill explored a few different genres such as Hip-Hop, Reggae, Rap, R&B.  Most of the reviews at the time were written by male journalists, and kept their focus on Hills emotional state, rather than her music.

The theme for the bad reviews was that Hill had gone crazy. She cries several times throughout the recording, goes on long rants, and is very set on discussing everything with a religious standpoint. Sure, some could deem this as crazy, but as  a twenty-one year old woman myself, this is not uncommon. Hill was 23 when The Miseducation of Lauryn Hill was released, and 26 with the release of this album. According to Lady Gaga, after fame hit her at 21, her mental aging halted for sometime. Using that standard, no wonder Hill was not at her prime mental state with the release of the album.

Hill was also described as hating fame, and losing herself outside of “Ms. Lauryn Hill”  at this time in her life.

Allie Manders: So, maybe she is a little less than her best self at this point in her career, but that doesn’t mean the messages she is trying to deliver are misguided.

When describing the passing of Curtis Mayfield and the intentions he had for his music, Hill explains how he impacted and inspired her.

Lauryn Hill: It’s not really about the messenger, per se, it’s more about the message and how he had a time where he had to hold it. Because, you know, other people were singing love songs and other things, you know. He had a very political, spiritual message. And even though it was entertaining and you enjoyed it and  you would dance to it, there was this very heavy value. And as I listened to his Eulogy and I listened to the music, music that I grew up listening to, it just dawned on me that our generation is so different. You know, someone has to hold it.

Allie Manders: Hill brings up many topics about humankind that are insightful and at some points even hopeful.

So if her mental state was not in the best place, does that invalidate all that she was saying? With protest songs, I believe that you do not need to be perfect to make your point. Some people have great ideas, even if they do not practice what they preach. If we went by the standard  of only listening to those who are in a perfect mental state, and always practice what they preach, then many politicians would have never been in office today.

Mystery of Iniquity discusses Hill’s distrust and disdain for the US legal system. Hill had already faced some legal troubles after the release of her debut album. She was sued after not fully crediting everyone involved in the production and writing process. The claim stated that she did not include New Ark members in the credits of 13 of the 14 tracks on Miseducation. This may have been a large part of the inspiration for this song, but from some lines in the song, it points to her problem with the  legal system for many, especially people of color. It is widely known and studied, that the legal system does not favor people of color, with

There are lines in the song that directly point to this:

“Emotional victim blackmailed by the henchmen

Every word they speak it turns them out really white

Internally they absent of light

Burnin’ up the branch and the root

The empty pursuits of every tree bearing the wrong fruit”

In this last section played she mentions  a tree bearing the wrong fruit. This is a clear reference to Billie Holiday’s “Strange Fruit.” For those who do not know, “Strange Fruit” was a  song written by Abel Meeropol and performed by Billie Holiday. The song used graphic lyrics to describe the horrendous lynching of black people in the South at that time. Hill is clearly using this allusion to bring into the conversation the continued mistreatment of black Americans within the US legal system.

There was also tension in that year in general. The tragedy on September 11th had just happened. This event shocked all Americans, and changed the way we lived our lives daily.

Regardless of one’s thoughts on Lauryn Hill, she is worth listening to to at least form an opinion. She may  not always be very present or consistent, but what she has produced has undeniably been Hill speaking her own truth. Fans may want The  Miseducation of Lauryn Hill to be the only kind of projects she releases, but as an artist, Hill took creative liberties to express herself in a different way for her Sophomore album. She has had her ups and downs, but that does not dismiss the meaning of her songs. 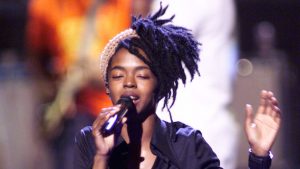